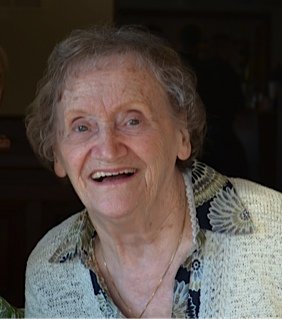 Norah. Hickey (nee Naughton), 89, of Stony Point, New York passed away peacefully on May 16, 2019 at her home . She was born February, 1930  in County Limerick, Ireland to the late William and Nora (nee Delea) Naughton.

She is preceded in death by her beloved husband, Tom, and her brothers Paddy, Connie, Tom, Sean and Billy, and sisters Kitty, Theresa, Mary, Eileen and baby Mary.

She is survived by her devoted daughters Cathy and Noreen (Tom), granddaughter Anna Catherine Leonido as well as her loving sisters Bernadette and Bridget, and brothers Joseph and Seamas.  She is also survived by many nieces and nephews near and far.

Norah left her beloved Ireland in 1948, celebrating her 18th birthday on the ship to America.  She was welcomed by her dear sister Kitty and family in Manchester, NH, and was later joined there by her sister, Bernie.  Shortly after arriving in New England, Norah found work as a telephone operator with AT&T, a job she thoroughly enjoyed and which eventually led her to New York City.  She loved the excitement of the "Big Apple" but never forgot her roots, crossing the Atlantic an amazing 13 times by passenger ship to visit family and friends in her native Ireland.  On one of those trips, she reconnected with Tom Hickey, who she knew from their home town of Kilmallock; within a couple of months, they were engaged and would eventually return to New York as husband and wife to raise their two daughters in Brooklyn.  Norah spent many years as a devoted wife and mother, always making herself available for class trips and bake sales.  She reentered the workforce as an administrative assistant with the NYC Law Department in 1980 so that she and Tom could put as much money as possible towards their daughters' college education.  In 2006, after many happy years on Kimball Street, Norah and Tom made the move to Stony Point to begin their next chapter as proud grandparents to Anna, who they both adored.

Norah will be remembered for her love of family and her strong Catholic faith.  She was a prolific knitter, loved music and the New York Mets, and was famous for her Irish soda bread, lamb stew and cream puffs.

Visitation will be from 3:00pm to 7:00pm on Tuesday, May 21, at TJ McGowan Funeral Home, 71 N. Central Highway, Garnerville, NY.  A Mass of Christian burial will be celebrated at 10:30am on Wednesday, May 22, at St. Gregory Barbarigo R.C. Church, 29 Cinder Road, Garnerville, NY.  In lieu of flowers, her family requests donations in her memory to the Alzheimer's Association, http://alz.org.

To send flowers to the family or plant a tree in memory of Norah Hickey, please visit Tribute Store
Tuesday
21
May

Share Your Memory of
Norah
Upload Your Memory View All Memories
Be the first to upload a memory!
Share A Memory
Send Flowers