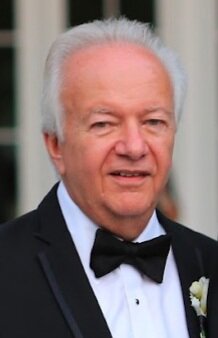 Neil F. Armida, Sr. age 75, dedicated husband of 56 years to Joanne (Viviano), loving father of four, and cherished papa to eight, passed away peacefully after succumbing to a brief illness on June 30, 2022 with his loving family by his side. He graduated from Gorton High School in Yonkers, NY in 1964 where he played in the school band for all 4 years. Neil then went on to attend Westchester Community College. Neil was drafted for the US Military and served in the US Navy for four years on the USS Fulton Submarine Tender during the Vietnam War. He married his high school sweetheart and love of his life, Joanne, on April 30, 1966 and had four children. Neil was a drummer for many years in several bands. Neil worked for Technicon as a Consulting Engineer and then took on a business adventure with Joanne when they opened their own flower shop, Floral Inspirations in Pearl River, NY. Neil also worked at TJ McGowan Sons Funeral Home for a short time before moving to Lake Ariel, PA. Neil found great joy in being a DIY expert. He was always fixing or improving something around the house so that it met his high expectations and he was his family’s go to handyman, helping everyone with projects of their own. Neil took great pride in his handiwork and recently built a bar that he was so excited to finish so he could entertain friends and family. Another of Neil’s greatest pleasures in life was traveling with Joanne and friends on cruises all over the world. The true light of Neil’s life was his grandchildren. He took every opportunity to each them a skill, spend time with them at the “Brown House” in PA, and love them to pieces. He loved when his grandkids came to visit and would go fishing and boating. Neil is predeceased by his parents, Neil and Rose (DeFucci) Armida. He is survived by his beloved and devoted wife, Joanne, daughter Michele Carron and husband Jim, son Neil, Jr. and wife Deirdre (Curran), son Brian and wife Ivone (Aviles), son Nick and wife Jaime (Squillini), and eight adoring grandchildren, Michael, Nicholas, Joseph, Christopher, Daniel, Colton, Liliana, and Austin. Neil is also survived by his loving cousin who was like a sister, Millie Peters and husband Jim, as well as many other cousins and their families and many dear friends. Family will receive friends on Friday, July 8, 2022 from 4-8pm at TJ McGowan Sons Funeral Home, Garnerville, NY. Neil’s Mass of Christian Burial will be held on Saturday, July 9, 2022, 11am at St. Gregory Barbarigo Catholic Church, Garnerville, NY with Military Honors. The family will be having a private burial of cremains at a later date. In lieu of flowers, Memorial Donations may be made to Columbia University Herbert Irving Comprehensive Cancer Center.

Share Your Memory of
Neil
Upload Your Memory View All Memories
Be the first to upload a memory!
Share A Memory