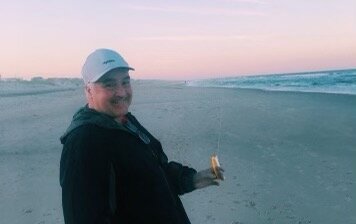 Mac was born on February 11, 1961 in Ramapo, NY to James and Dorothy (née Glock) and grew up on Captain Shankey Drive in Garnerville, NY. After graduating from North Rockland High School, he went on to study criminal justice at St. John’s University before embarking on a 20+ year career in law enforcement with the NYPD and Haverstraw Police, where he would endear himself to an entire community through his strength, compassion and generosity.

Mac married the love of his life, Marie (née Holly) on September 16, 1989 in an elaborate celebration with over 300 family and friends. A few years later their daughter Kelcie, the apple of his eye, was born and completed their family. Through the years he treasured life on the lake, regular trips to Boston, countless Long Beach Island vacations, many fun-filled island getaways with friends of all ages​, Sundays at the club​ and of course, being a devoted swim dad.

As a member of the North Rockland Social Club and the Haverstraw Elks, Mac could always be counted on to lend a hand, volunteer his time or organize an event to support anyone in need. Truly a friend to all, Mac effortlessly brought people together. He loved the North Rockland community and in turn was beloved by all who knew him.

Mac was always quick with a joke and affectionately known for making a short story long. As Halligan’s Employee of the Year, TLC Social Director or Immaculate Conception’s gym teacher, he would always bring out the best in everyone around him. An avid reader, dedicated Law & Order expert, lifelong Giants fan, frequent winner of super bowl pools and proud fanilow, Mac enjoyed life to the fullest. Although cut too short, his was a life well lived.

Mac is survived by his loving wife Marie McNamara (Holly) and daughter Kelcie. His father and mother-in-law, Edward & Ann Marie Holly, his brother James McNamara (Norma), sisters Mary Gwisdak(Greg), Eileen Oot, his sisters-in-law Renee (Joseph Lavelli), Kathleen (Thomas Gannon) and Jeanne (Brian Mullen). Mac is also survived by his adoring nieces and nephews, Diana and Pat Carey, AJ and Nicole Carey, Andrew and Michelle McNamara, Kevin Hanlon, Michael Hanlon, Dan and Anne Gwisdak, Gregory Gwisdak, Michael Oot, Brian Oot, Tara and Niall Freeman, Holly Lavelli, Rebecca Lavelli, Eddie Gannon, Connor and Danny Mullen. Mac is predeceased by his parents, James and Dorothy McNamara and his sister Kathleen Hanlon and brother-in-law John Hanlon. There are not enough words to describe this devastating loss to all who knew and loved Mac. We ask that you all pay it forward with kindness and humor as Mac would do. A NRHS Scholarship is being created in Mac’s name to honor his memory.

Share Your Memory of
Thomas (Mac)
Upload Your Memory View All Memories
Be the first to upload a memory!
Share A Memory