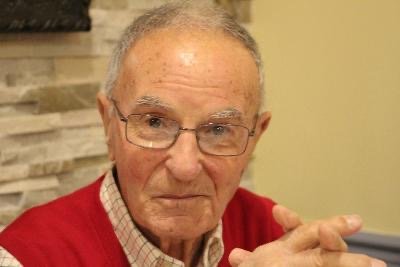 Emanuele Bertolino, age 91, of Stony Point, NY (formerly of West Haverstraw, NY) passed away peacefully at Villa Marie Claire Hospice with his beloved family by his side on March 3, 2020.

“Neil” as he was known to most, was born on January 14th, 1929 in Scoglitti, Italy to the late Giuseppe and Angela (Savasta) Bertolino.  He enjoyed a wonderful childhood in Scoglitti, a small fishing town on the coast of Sicily.  He attended school through the fifth grade and then went to work.  He held various jobs over the years and ultimately became a crane operator building the first port in town.  This was also the beginning of his love of Do-It-Yourself “DIY” - he built a motor and would beam with pride to tell the story of how he owned the first motorboat in all of Sicily!  Neil immigrated to the United States in the mid 1950s and settled down with his beautiful bride, Lina in West Haverstraw, NY.  It was here that they spent 40+ wonderful years together raising their children amongst many neighbors, who also happened to be family.  Though he came to this country with limited education, he was an ambitious man who never gave up and he built several very successful businesses and even had a patented product.  After many years of hard work, and after their children had married and started their own families, Neil and his beloved Lina, built their dream home overlooking the Hudson River in Stony Point.  It was here that Neil loved to sit on his deck soaking up the warm sun and enjoying the beautiful view.  He also spent treasured time vacationing in Madeira Beach, FL, many summers in Wildwood, NJ where they owned a seasonal motel for many years and of course, returning to Scoglitti to visit family and enjoy the beach.

Neil’s hobbies including tinkering – if something was broke, he was happy to fix it and even if it wasn’t broke he was happy to try and improve it in some way; gardening – he took wonderful care of his tremendous garden on Lafayette, and had great pride in maintaining it and providing food for his family; playing Sicilian cards; building paper airplanes with  his grandkids and being a prankster – he loved to play jokes on others.  His greatest joy however was his family – his wife, children, their spouses and ultimately his grandchildren.

Neil is survived by his loving wife of 60 years, Lina; his children, John (Stacy) Bertolino of Stony Point, NY and Christina (Joe) Honcz of Milford, CT and his grandchildren, Alicia, Kaitlyn and Matthew Bertolino and Joey and Emma Honcz.  He is predeceased by his parents as well as numerous siblings.

Friends and family will be received on Sunday, March 8th, 2020 from 1pm-5pm at TJ McGowan Funeral Home, 71 North Central Highway, Garnerville, NY. In lieu of flowers, we kindly ask those who wish to do so, to make a donation to the Tommy Fund for Childhood Cancer – PO Box 8295 New Haven, CT 06530.

To send flowers to the family or plant a tree in memory of Emanuele Bertolino, please visit Tribute Store
Sunday
8
March

Share Your Memory of
Emanuele
Upload Your Memory View All Memories
Be the first to upload a memory!
Share A Memory
Send Flowers