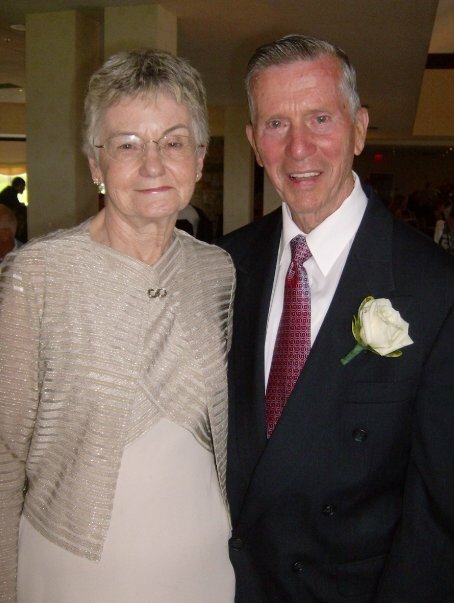 Vinny leaves behind his wife, Gloria (Capodilupo). The two were childhood sweethearts and were married on September 12, 1953. He was predeceased by his parents Anthony and Anna, his brothers Billy, Joseph and Anthony and his sister Patricia. He is survived by his sister Mary Tarrant (Hollywood, FL), and brothers Victor  (Highland Falls, NY), Charles (Hampstead, NC) and John (Bluffton, SC). He is also survived by his children: Diane and George Wanamaker (Rockland, MA); Joseph and Sally (Chesapeake, VA); Vincent and Sandra (Washingtonville, NY); Thomas (Stony Point); and Susan and Mike O’Hara (Stony Point). Vinny loved his cousins like siblings and spoke often of the good times with the Crapanzanos, Spinas and Rendinas.

Vinny and his wife Gloria left the Bronx and moved to Rockland County, settling in Stony Point in 1963. Both have been parishioners at Immaculate Conception Church since that time. Vinny served as an usher at the church and was involved with the Men’s Club for nearly 50 years.

Vinny worked for Sears as a repairman for over 30 years, retiring in 1996. He also was a partner in J & V repair service for many years repairing appliances for many families in the North Rockland area. It never made him rich. It made him friends.

Vinny was a Little League coach and also served as a volunteer member of the Stony Point Police Department in the 1960s. He was an avid bowler and played on teams at Hi-Tor Lanes in Haverstraw in the 60s and 70s.  He enjoyed playing racquetball with his friends and rode many miles on his bicycle before being diagnosed with Parkinsons shortly after retiring in 1996.

Vinny’s battle with Parkinsons was mostly behind the scenes until he lost his ability to walk in 2017 and he tried his best to get strong enough to leave the wheelchair on many occasions.

Vinny enjoyed his life; his family; his neighbors and friends. He was always ready to help with a home improvement project. The Bronx Boy borrowed a neighbors tent and he and Gloria took the family to Maine for a weeklong camping adventure in the 1960s, which turned into a lifelong activity as the tent changed over to a pop up camper and graduated to a Winnebago in the 1990s. Vinny had a lifelong sense of humor. He had a slight smile for a few moments on his last day -- perhaps remembering a situation that he always found humor in.

There will be a viewing at McGowan Sons Funeral Home, 71 North Central Highway, Garnerville NY on Thursday, August 8, from 2-4 and 7-9 and a Mass at Immaculate Conception Church in Stony Point at 10 am on Friday, August 9th, followed by burial at St. Peter’s Cemetery in Haverstraw.

In lieu of flowers, family and friends are invited to donate to the Church of the Immaculate Conception, at 26 John Street, Stony Point, NY, in honor of Vinny, who served more than 50 years as an usher at ICC.

To send flowers to the family or plant a tree in memory of Vincent Crapanzano, please visit Tribute Store
Thursday
8
August

Share Your Memory of
Vincent
Upload Your Memory View All Memories
Be the first to upload a memory!
Share A Memory
Send Flowers