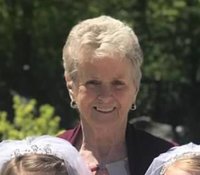 Judith was born in Brooklyn, New York to parents Thomas and Margaret Barrett. It is there where she met the love of her life William (Bill) of 54 years.

In April 1972, they relocated to Stony Point, New York. Judith served the County of Rockland proudly for 35 years in the Department of Social Services Child Support Unit before retiring in 2008.

Anyone that knew Judy, knew her love for traveling to Florida during the New York winter months, numerous trips to “the happy island” of Aruba and day trips to the casino. Judy enjoyed doing crossword puzzles and playing solitaire. Judy was an avid fan of the New York Yankees, Green Bay Packers and Amazon Prime. She had a love for the holidays, especially Christmas and St. Patrick’s Day, surrounding herself with family and friends. Judy cherished her time spent with her children and grandchildren.

Her beautiful smile, contagious laugh and zest for life will be missed by all.

Judith is predeceased by her husband William, her parents and sister, Patricia Donohue.

**In Lieu of flowers donations can be made to the United Hospice of Rockland.